The French Music Bureau's Christmas party at the French Institute was a very civilised way to spend a thursday evening. It kicked off with a showing of Buffet Froid, Bertrand Blier's very black 1979 cult comedy of lovable serial killers (Gerard Depardieu, Bernard Blier and Jean Carmet) with a live musical accompaniment by Olivier Mellano ( it was really good but an occasional break would have been nice for him as he played constantly for the duration of the movie).
There was nothing cold about the ensuing reception where the champagne flowed, the nibbles were forthcoming and the highly amusing company got even more drunk than us..
Posted by fabtoons at 14:09 No comments:

Last night , I went to Shepherd's Bush Empire to see Tinariwen, a bunch of Touaregs from Mali. They look quite incongrous as they come on in flowing Sons of the Desert robes and headgear and proceed to rock out on their LesPauls and Fenders. The auditorium was packed with a very white and predominantly middle aged audience but by the end they were swaying and clapping and ululating. Good night except for the stench of piss when we took to our seats. We moved to the opposite side of the hall but noticed later on that other people didn't seem bothered by it. Maybe they thought it was all part of the rock'nroll experience...
Posted by fabtoons at 04:13 No comments: 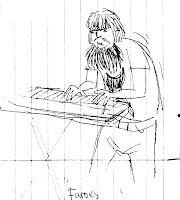 Last night went to a strange event at the Electric ballroom - hadn't set foot in there for donkey's years - called Gbob( Global Battle of the bands) as Nick was asked to be a judge. Turned out to be a weird but fun night out- free beer and pizza( always welcome) and bands from all over the world ranging from the out and out bizarre(Beloruss: ELP on an accordion), to the quite mundane ( afro pussy rebel?), to Spinal Tap ( the Lebanon with something reminiscent of Stonehenge), to the quite brilliant
( Japanese drum and bass-literally- and the winners who came from the Faroe Islands!). I did a few sketches...
Posted by fabtoons at 13:18 No comments:

The story so far

The last few months have been a whirlwind of activity after years of furtively drawing my comics on my own with little or no feedback.
Having fortuitously met Gary Northfield at an Indesign course, he encouraged me to put my comics in Gosh! and Orbital where they were picked up by Paul Gravett who invited me to take part in the 24 hour comic event at the ICA.
This summer I also created a strip for the Observer Graphic Short Story competition. I didn't win but was pleased with my effort and the standard of entries was so high that I didn't feel embarrassed
( although slightly baffled by the winning entry). 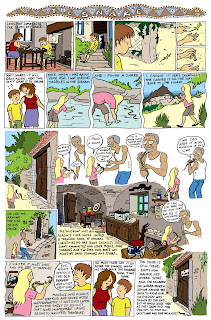 You can check out some of the other entries here. 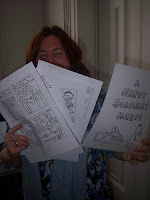 You can read it here


A couple of weeks later I took part in the ICA Comiket small press comic fair. I made up my 24 hour effort into a mini comic to sell along with my other efforts. Again a brilliant day (not from a commercial point of view- spent more on comics and beer than I made).
Not only caught up with Richy and Sean and got a chance to talk to some of my other fellow 24hrers like Richard Peel and Oliver East but met even more great people and did loads of good swaps.
Having finally worked my way through my big pile of swag, I'm still chuckling over the wit and wisdom of Richard's Fights and Wizards, loved Oliver's beautifully observed Trains are...mint 1-3 and the raw miserabilism of Bedsit journal is hilariously drawn by Richard Cowdry (an awful lot of cartoonists seem to be called Richard...)

Posted by fabtoons at 03:39 No comments:

This is my blog. I will post toons and pics and occasional news or whatever