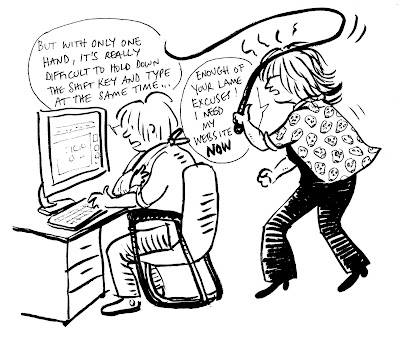 Nick had only just started uploading the new website when he fell and broke his shoulder hence the rather sparse amount of stuff up there. Yesterday he one-armedly got back into it.
It is not finished and it may take some time but we will get there in the end...
In the meantime I will try and absorb some of his Dreamweaver knowledge so I can add to it independently.
Posted by fabtoons at 01:19 No comments:

Out on a limb 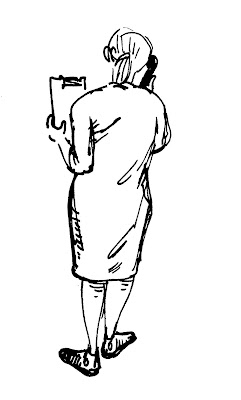 Well whaddayaknow?
Nick turned out to have a broken arm after all...
In between my stints as ministering angel/Baby Jane (whatever happened to her?), I've kept up my cultural quota by fitting in a ballet, I mean contemporary dance, at Saddler's Wells where I saw William Forsythe's very challenging show, a quick trip to the V&A jewellery collection, as well as a club night at the Queen of Hoxton – You look Rough (I certainly felt it the next morning). I didn't overdo it, just getting too old for all that malarkey. 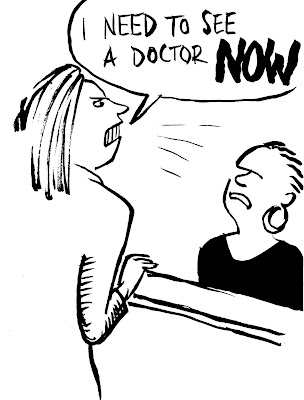 Pubdraw was on last night, after curry in Kenton, but here are a couple of NHS sketches as I have been spending an inordinate amount of time in their establishments of late.
Posted by fabtoons at 09:24 No comments:

It's been a while, I know, but the last couple of weeks have been fairly eventful, as the visit from my brother and nieces that included a trip to Faversham was complicated by Nick's unfortunate fall and dramatic rush to hospital all morphined up. As it turns out he hasn't broken his ribs and arm as was originally thought, but is severely impaired by damage to his shoulder, which restricts him even more than ordinary mortals due to his existing condition. It's a bummer but at least he's home now and able to communicate with the outside world again.

Before all the Easter excitement we had popped down with Dan to the ICA to catch Tony Manero, a darkly funny and brilliantly bleak Chilean movie about a psychopathic Travolta (circa Saturday Night Fever) impersonator. Well worth seeing, though probably won't appeal to all palates.
And Hugo very kindly bought us a copy of Don't Mess with the Zohan on DVD, not a film I had felt impelled to rush out to catch when on general release, but believe it or not, it deserves a place in the pantheon of ridiculous tastelessness that includes such gems as Dodgeball. Disco Disco, my friend! 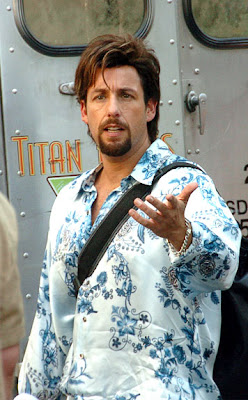 Sadly I don't think Nick will be practising any disco moves for a while...
Oh and I almost forgot! Just before being put out of action, Nick had uploaded my new revamped website – so check it out here!
Posted by fabtoons at 06:30 No comments: 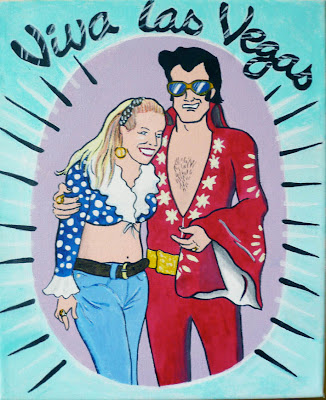 Finally gave Krissie her painting so now I can post it. Suffice to say she was extremely happy with it. Me too.