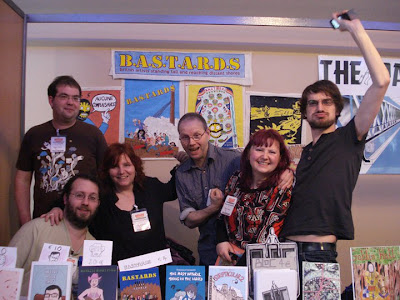 My second visit to Angouleme was a more relaxed experience than the first.
For starters I knew now that spending six days with my chosen companions would not ruin our friendship. This year, Dan Lester, Sean Azzopardi, Oliver Lambden and myself were joined by Sally-Anne Hickman and Rob Jackson. Though quite a large crowd to squeeze behind a table, we rubbed along fine, wandering off at will to check out the rest of the festival. Our spacious lodgings meant we could chill out by the fire and play pool when we had tired of the frenetic bar-hopping and party-seeking. Having scoped out the layout and the town previously made it easier to plan my sorties and hone in on the bits I fancied seeing. And not being so overwhelmed by the whole hugeness of it all made it easier to take in.
There were familiar faces – it was lovely to catch up with Abby Denson, Tim Fish and Xavier Lancel back again on the LGBT stand. Sally Anne and I popped over to the theatre where they appeared on a panel alongside Fred Harper and Charlie Adlard.
This time I checked out the permanent collection at the museum as well as the excellent Parodies exhibit, while Baru's wall of artwork was pretty humbling. 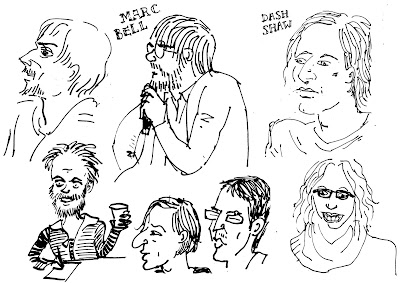 We made the effort to get to the Castro Building on Saturday morning where Dash Shaw, Marc Bell and John Pham gave a most entertaining and informative talk.
There were more brits than last year: the Nobrow group and Pittville Press were also exhibiting, Karrie Fransman brought a delegation from the London Print Studio and Dan Berry was teaching at the Maison des Auteurs. Let's not forget Ellen Lindner, gamely touting the Comix Reader, who could be found recovering in Le Chat Noir alongside Stephen Betts, Cliodnah Lyons, Tanya Meditzsky , Patrice and John Aggs and Gary Northfield. We even bumped into Alex Potts of Turd Party fame.
We had some fantastic neighbours in the tent. Adriano Barone and Christian Marra of Passenger Press were unfailingly warm and their sense of humour was as off-colour as ours.
Now home and suffering from a mysterious virus, I am working my way through my bunch of swag. Wednesday's official Comix Reader launch party helped to alleviate the withdrawal from 24hr comic immersion, and most cheering was a favourable mention of my contribution in this review of Solipsistic Pop 3
Posted by fabtoons at 01:57 1 comment: