Ned is heading off to St Petersburg on Saturday so here's a little something from my strip that is appearing in Rob Jackson's upcoming Gin Palace anthology - to be unveiled next month at the Thing and Schmurgencon 3.
What's the connection?
Posted by fabtoons at 14:02 No comments: 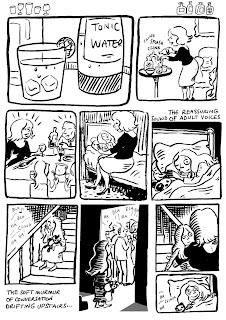 I've been working on an eight-page contribution to Rob Jackson's forthcoming Gin Palace anthology. Here's a sneak preview of the first page. I haven't settled on the title yet.
With a lot of different projects on the go at the moment, I just have to keep plodding on, trying not to think too much about how much there is or it gets too overwhelming and I grind to a halt.
Posted by fabtoons at 12:31 3 comments: 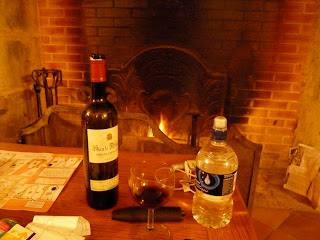 A week ago Monday I returned from the amazing 2010 Angouleme Comic Festival, but more pressing events quickly took centre stage .
Tragically, my father in law's health had taken a downward turn over the last month, and by Wednesday, a good and kind man had left us for good. Both Nick and his brother were in attendance, but the speed of Arthur's demise still left them reeling from the actual realisation that they were truly grown up. They wouldn't be able to ask Dad for advice... It's been a steep learning curve but things are now taking their course, the organising and sorting helping to channel the grieving process.
I won't be writing a full report on Angouleme, but have posted pictures on the B.A.S.T.A.R.D.S. site as well as on facebook
The whole shebang was totally awesome, I saw the likes of Robert Crumb and Aline Kominsky, Sempé, Moebius, Fred, Willy Lambil, Lewis Trondheim, Blutch, to name but a few, and even handed over comics to Ivan Brunetti and J-C. Menu. There were exhibitions, a museum, talks, we were interviewed for Chilean TV, consumed a lot of pizza and wine. We stayed in a lovely house and didn't fall out. We met some wonderful people, especially the lovely Abby Denson and Tim Fish who had come all the way from the States to the LGBT stand. Not only does Abby write and draw great comics, she's a punk musician, and writes a blog about cake!
Posted by fabtoons at 01:24 No comments: 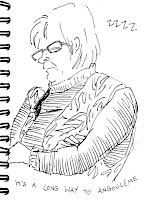 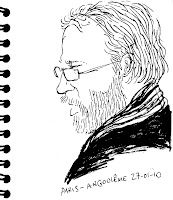 Some sketching on the train, including some(unfounded)worries about what to expect. 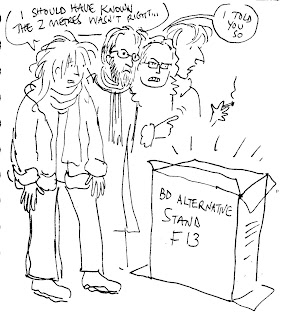 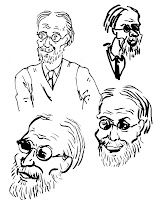 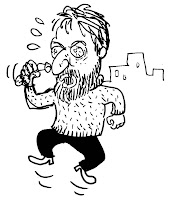 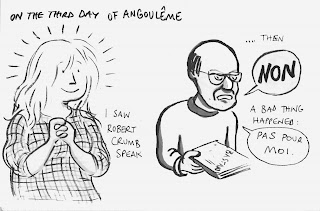