Overworked and over here

It never rains but it pours.
I've been juggling jobs for a week now, putting in twelve hour days to keep up with the volume. But I'm not complaining.
It all contributes to financing that rather expensive habit of mine – no, not the drink or the drugs, and most definitely not the gambling (never saw the point of that one) – but the producing of ilustrated pamphlets for the amusement of a rather select public. And trips to Gay Paree. My collected edition of TMNTITW is at the printers as we speak, and I would love to get something new out for Leeds which is only two weeks away. 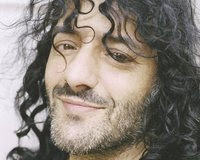 Had a most excellent night out at the Barbican last week grooving to the exotic sounds of Africa Express, a star studded extravaganza of some of the top musicians from that continent, from Toumani Diabate through Amadou and Mariam and culminating in the godlike Rachid Taha, who can do no wrong in my eyes ever since I heard his version of "Douce France" with Carte de Sejour.

The highlight of this weekend will be Halloween; my little nieces are coming over from Paris for the express purpose of a spot of trick or treating in the spooky neighbourhood of Kensal Rise.
Posted by fabtoons at 06:54 No comments: 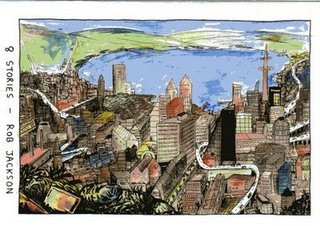 Rob Jackson's latest looks great on the outside and doesn't disappoint. As it says on the tin, there are eight stories here. The tone varies agreeably throughout; the quite poetic opening tale, written by Shonah Ingram, of the City by the Lake, and a couple of sketchbook/diary type pieces – one of South Korea, another covering a night out at a gig – are interspersed with more obviously humorous strips. All are shot through with Rob's warm, wry, self-deprecating wit.
My personal favourite, if I have to pick one, has to be the tale of adventure and horror entitled Blood and White Water as it rings quite a few bells in this house.
Rob's words and pictures complement each other beautifully. In the more linear stories, his drawings illustrate the action in a wonderfully clear fashion, while elsewhere raw jottings translate thoughts and mood.
Posted by fabtoons at 10:51 No comments:

Publishing news, Paris and a party in a pub

Listen up all you good people in blogland: my collected edition of TMNTITW is at the printers as we speak and will be available shortly!!! I will be updating my website as it is no longer available in its original format as four comics as I have completely sold out.
Having safely despatched the files to the printers, I skipped over to Paris again for a few days last week to attend to some family business and catch up with an old friend. My friend unfortunately had been taken seriously ill so I ended up catching up with him in intensive care (I have since my return received some more optimistic news). 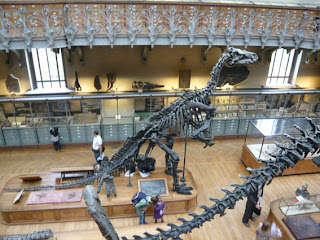 Along with some other more serious activities, I fitted in a visit to the Museum d'Histoire Naturelle in the Jardin des Plantes with my brother and nieces, a wonderfully old fashioned collection of dinosaur skeletons, pickled organs and two headed piglets in jars, all crammed into a quaint late nineteenth century building and refreshingly un-jazzed up. The larger dinosaurs hadn't been dusted for so long they appeared snow-capped. 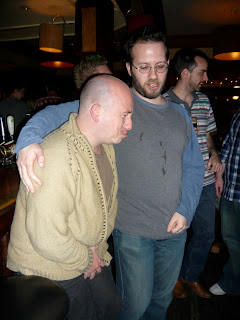 I returned in time to head straight to a pub in Euston where London Underground Comics were celebrating a year of success and good times with their usual exhuberance. Lots of testicle grabbing and a good time was had by all.
Posted by fabtoons at 09:14 No comments: 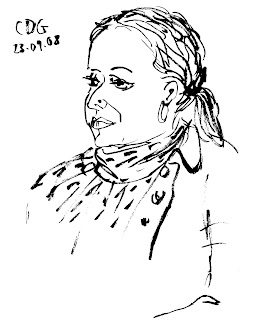 Getting to and from Paris by air was a bit of a pig, involving a lot of sitting around in Terminals. Good for sketching but Eurostar gets you there so much quicker!
Check out this fantastic review of Most Natural Thing on Forbidden Planet. And only a couple of weeks ago Rob Jackson posted this about Nasty Habit on his excellent blog.
It makes me feel all warm and fuzzy inside to know that people out there are reading my comics and getting them.

No, I didn't pay them and they're not even related to me or nothing... 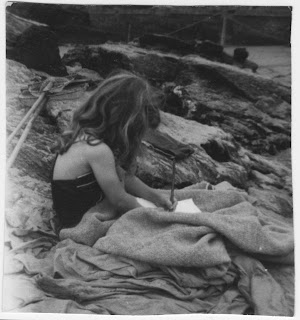 Oh and look at this picture of ME. So young and already so talented.
Posted by fabtoons at 03:05 No comments: