From Gay Paree to A&E by way of Bristol

Returned from Paris on Thursday night after a couple of days visiting the folks. A spot of stapling on Friday night after work and I was set for my first ever Bristol Expo. 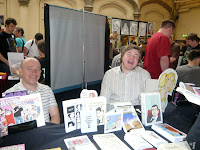 My day trip turned out just fine. The company was fab and I made the right call for once and dressed appropriately as it was somewhat oven-like in the convention hall.

Digging the nerdfest... Above: David and Jake; below: Oli, Sean, David and Oliver 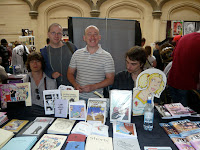 Managed not to miss my train and got there in time to meet up with the LUC gang and their hangovers for kick-off. There was a massive queue waiting to get in even before it opened with a large sprinkling of daft buggers in superhero garb – those stormtroopers and Darth Vaders must have been cooking inside their costumes. Or maybe it was some kind of sponsored slimathon...
The stall was heavily manned with seven or eight of us sharing the two chairs in rotation. Did a fair bit of circulating around the hall and bumped in to a few familiar faces. And I dared Sean to steal an apple at the Ramada. We're so rock'n'roll.
By the end of the day my feet were killing me and Richy and I managed to lose Jake on our quest for food with the help of Sean's crap excuse for a map.
It all turned out OK. We eventually stumbled upon the Weatherspoon by accident and everyone gradually drifted there including, finally, Jake who was most pleased to have found not only a branch of Subway in his wanderings, but also the car he had lost earlier that morning.
Had to leave before the Eagle Awards to get my train back to town.
I arrived home at midnight just in time for a whole other drama to unfold.
Suffice to say that not a lot of sleep was had as I fielded calls from Nick from the hospital until he got home at 6am. I brought Lucy home on Sunday afternoon, thankfully with no lasting damage, but we were all pretty shaken by the incident.
And so relieved that I had decided to only go for the day.
Everything happens for a reason.
Posted by fabtoons at 04:28