A woman's point of view 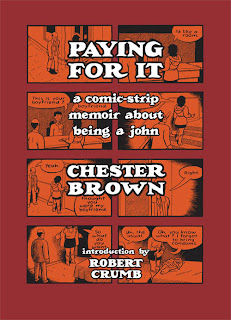 Having failed so far to find any reviews of this by a woman, here goes.
Chester Brown's Paying For It, a graphic memoir detailing his experiences with prostitutes as a customer, is a fascinating insight into the mechanics of a transaction that tends to be mysterious to a lot of us.
Unless engaged in said activity in one or other capacity, one has but a sketchy idea of the interaction. Chester Brown presents a totally deadpan, and presumably honest, picture of his dealings with a number of women over a period of five years. Prompted by the end of a relationship and coming to the conclusion that the only part of it that he misses and can't get from friends or family is the actual sex, he rationalises that it would be easier and cheaper to pay for the occasional shag.
This is actually very funny as he details calculating how often he can indulge without it costing him any more than dating a girlfriend, gets all wound up and paranoid about how to hook up and worries about the etiquette.
The reactions when he confesses his actions to people, the Woody Allenesque discussions between him and friends (mostly fellow cartoonists Seth and Joe Matt), the thoughts that go through his head while engaging in the activity all contribute to the humour as we vicariously follow this odd skull-headed creature into unknown territory. 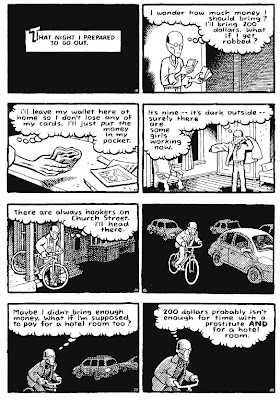 But once he has got over the initial awkwardness and fear and gets more confident with the milieu, it starts to become an uncomfortable read. As he tries to reconcile his supposedly non sexist attitude with his dispassionate dissection of the women he visits, evaluating the attractiveness and the performance of faceless females (the facelessness, he argues, in order to protect their privacy). He visits review sites and starts leaving reviews himself. He seems unable or unwilling to look too deeply at some of the situations he finds himself in. He wants to believe that all the women he visits are simply business women who have chosen this profession as logically as he decided to use them. There is a total lack of questioning as to the myriad motives and experiences that may have lead them to this place. And an inability to consider that maybe what they are telling him is not the truth. Maybe he was very fortunate in only meeting such well adjusted ladies, maybe all johns are polite, mild mannered individuals like himself, who even tip when they don't have to. Maybe Canada is a country where everything is nice.
At the beginning, he is constantly afraid of being robbed, beaten up or arrested, it doesn't seem to occur to him that those are the risks the women are taking. In the lengthy notes at the end of the book, Brown seems intent on justifying his position by glossing over the darker aspects of the trade - pimping, violence, drug addiction and trafficking. He refuses to see that the relationship is not one of equals; he is in a position to take it or leave it, while they are bound to provide the service, however repugnant he may be to them. He is in control as to whether the transaction takes place.
While I believe all women should be free to dispose of their bodies as they wish, including selling them, most have complicated reasons for going into prostitution and too many are forced into it. Chester Brown's premise that prostitution is just a form of dating and that one day everyone will just buy sex from each other is actually hilarious. He doesn't seem to understand that the world is already that way, just that he's not rich enough to participate in that particular feast. Since time immemorial, the elite have generally been able to mate with the better looking females of the species. Wealth allows men, however old or hideous, to take their pick, and pension off the no longer nubile.
Paying For It is an appropriate title, as money is the crux of the matter and Chester just needs to make more of it to make his dream a reality.
As an autobiographical comic, this is fascinating. We observe tiny figures in rigidly laid out panels from a distance as we follow Brown on his encounters. An articulate and intelligent, apparently kind and gentle, but emotionally remote and ultimately self-deluded man, he has managed to justify his solution for getting laid with attractive and mostly younger women, without risk of rejection or getting involved, by naively denying any troubling aspects of the trade that he is engaging in.
Posted by fabtoons at 02:13

Thats a good review of it. The Comics Journal had a review by a woman here http://www.tcj.com/reviews/paying-for-it/ but there's not been very many. There's a great lack of women reviewing comics.

Thanks, I have read it now . The book obviously throws up many questions, like hers about what constitutes good sex, but I was mostly surprised at his ability to intellectualise away any possibility that the women may have been exploited or abused - assuming that if they didn't say anything then it can't be so. And his remarks about trafficking seem positively retarded..

I had read your review and various others which made me want to read it (which were all better reviews of it as a comic), but afterwards I got quite exercised the more I thought about it. It seems so strange that someone who seems perfectly able to relate to women can also treat them like merchandise.
Having said all that I like the book. It's frank, a lot of it is funny, it opens up a debate and the drawings are great.

The bit of the book I really didn't like was the giving reviews for the women on that website.

Great review, very articulate and level headed, it refuses to paint Brown as 'evil' for what he does, but simply as incredibly dellusional for what he believes. This is probably going to be the most talked about graphic novel this year as Crumb's Genisis was last year, and mostly from what I've read it is being praised for its 'honesty'. Have you read the review on Death To The Universe? The reviewer outright demands you read it but don't buy it and put money into the pocket of someone who is making money off exploiting women and that we would only want to read it to suit our voyeuristic urge to see a prostitute without actually paying for one, which is pretty absurb. I haven't read the book yet, but I'm more interested in his crackpot theories and justifications than anything else, and you're right, it will at least open a debate on the subject, I'm sure something useful can be gleamed from it. It's also as if we need a response to this, told from the prostitutes point of view, something like the graphic novel equivalant of Nick Broomfield's documentary about the legal brothel in Nevarda called Chicken Ranch.