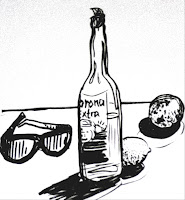 The last week has been a whirlwind of new experiences, old friends and breathtaking vistas. Sexy Texy In Las Vegas, the Grand Canyon with Laura and Jess, Nic Egan and family in the Hollywood Hills and the James Gang in Santa Monica!
Posted by fabtoons at 17:43 No comments: 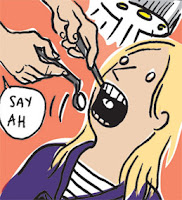 Just sent off my contribution to the Thing anthology. Phew. Thought I might have to eschew the theme altogether but Lucy saved the day by reminding me of one of my boring anecdotes and Hey Presto, I had a story incorporating giraffes.
Needed to get a few things out of the way (didn't make it to the dentist, bought a big ass suitcase and attempted a perfunctory tidy-up) before we take off for the States on Saturday – Las Vegas and Hollywood, here we come!
Well, I guess I won't be posting for couple of weeks but you never know...
Posted by fabtoons at 09:35 No comments:

Needless to say I haven't achieved any where near as much as I had hoped to last week. but we did catch a preview of the Jack Black/Michel Gondry movie Be Kind Rewind. Very funny idea, and their website is hilarious with the sweded google. Check it out.
Back for another dose of Inn on the Green on friday but this time wisely avoided alcoholic refreshment ( Nick didn't fancy coming out so I had to drive). Also meant I was bright eyed and bushy tailed the next day to drop by Underground Comics in Camden for a couple of hours. It was a beautiful day to be hanging out with Oli, Oliver, Sean, Andy Luke et all with much laughter and a little drawing and I even made a sale.
I continue to deny any involvement in the huge fire at the market later that day.
Posted by fabtoons at 00:33 2 comments:

Krissie and I went to the British Museum again for another bout of statue rubbing and hey presto she got a job a couple of days later so don't tell me they're not magic...
Thursday checked out some comedy at the Masons Arms, Friday back at the Inn on the Green for a few drinks and Carbon Silicon (Mick Jones and Tony James) night. Gary Crowley DJing and Nick on the receiving end of much love (and quite a few drinks) from some excellent chaps who happened to be Members fans.
Then it was off to Paris Saturday to fulfill my filial duty and catch up with family and old chums, back crack of dawn Tuesday and straight in to work.
Phew. Now hoping for a few clear days to get some drawing done.
Posted by fabtoons at 04:41 No comments: 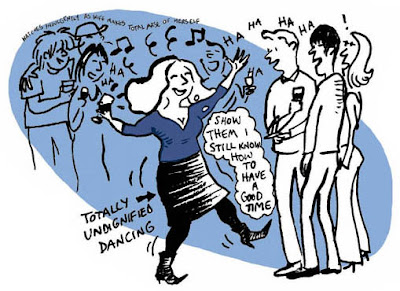 Last Saturday saw a display of disgracefully bad dancing as I celebrated quite a big birthday.
Actually it was bloody good fun.
Even if it did leave me a tad brain damaged for a few days and caused me to be late finishing a couple of jobs. And I was responsible for my mate missing his flight back to Toulouse. There was a later one.
Well you're only 21(cough splutter) once!!
And I still don't know where the magician came from. He appeared out of nowhere, performed an amazing card trick, handed me an apple and disappeared...
Posted by fabtoons at 06:40 No comments: