It's a paper and it's a comic 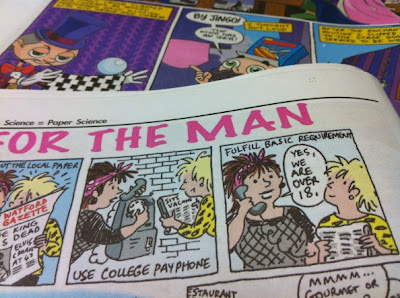 Hey everybody, rejoice!
Your new favourite comic newspaper is ready, featuring contributions from Sean Azzopardi, Tom Humberstone, Kristyna Baczynski, myself and many more. Click here for details.
Paper Science 6 will be on sale at MCM Expo this weekend and is available from the Words and Pictures website as of now.
Or you can wait a few weeks and pick up your copy at Comica in London or Leeds Thought Bubble.
Posted by fabtoons at 06:02 No comments:

Last night, we gathered in a fantastic house close to the British Museum for the launch of Nicola Streeten's graphic memoir, Billy, Me and You, a frank reflection on the aftermath of losing her two year old son. Her unflinching examination of her and her partner's ways of dealing with this terrible tragedy, from suicidal thoughts to angry judgement of others' inadequate responses, may sound like a harrowing read but Streeten's honesty at revealing some of her less generous thoughts, along with her sense of humour, manage to keep this sensitive material far from grim, while remaining extremely moving. In the words of The Guardian, it is quite a feat.
And that is another reason to rejoice at the success of this project. Despite much recent progress in the way comics are perceived in the UK, we still have a long way to go. Like the music business in the late seventies, the mainstream press and publishing world still seem stuck on the idea that the virtuoso artistry of the package outweighs its content. It took punk rock, much of which has stood the test of time and has gone on to be a huge influence, to explode that myth. I see this book in the same revolutionary vein, its artwork not seeking to soothe the reader with beautiful images, but rewarding with its raw emotion, and an ultimately uplifting message, those who can look beyond esthetic orthodoxy . Bands like The Ramones and The Clash were denigrated as poor musicians by the establishment, but their legacy still carries more power and energy than anything any supergoup ever produced.
This is brave step in the right direction, helping to bring about a shift in attitude. UK readers and publishers will eventually understand that Sequential Art is more than a series of illustrations arranged pleasingly on a page, but words and pictures combined to convey stories, ideas or feelings, that transcend the sum of their parts.

Comics are more than pretty pictures!
Posted by fabtoons at 05:16 No comments:

Next month I will be exhibiting at Comica's Comiket alongside my good friends and very talented individuals Sean Azzopardi and Sally Anne Hickman, as well as many other creators and publishers. It will take place at the Bishopsgate Institute and entry will be free.
Posted by fabtoons at 05:19 No comments:

Comics are for kids 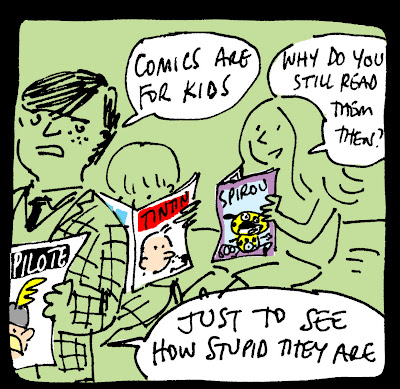