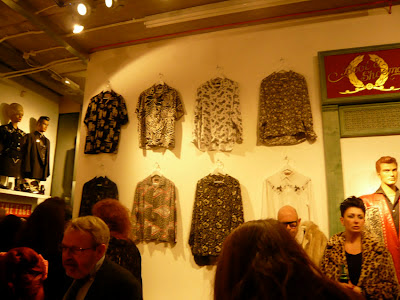 I forgot to mention the totally brilliant opening night at Lloyd Johnson's exhibition at Chelsea Art Space we attended on January 24th. The exhibition runs until until March 3rd, it's free and features some of Nick's and my stuff among all the unbelievably iconic clobber on show. 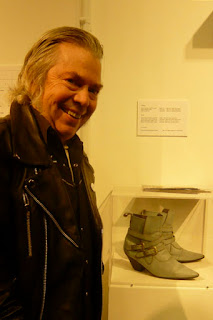 Nick poses proudly by his boots.


I think I overdid the imbibing a tad, but escaped the country the following day, albeit in a rather fragile state.
Posted by fabtoons at 05:42 No comments:

So much more I forgot to mention 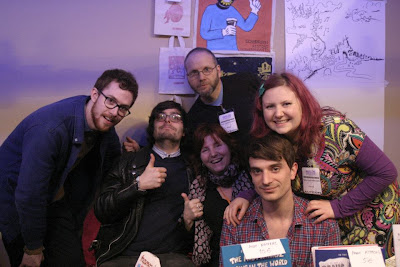 In December, Nick and I had our very own Christmas outing at the Royal Festival Hall where we caught John Waters' Christmas show which was hoot, and prompted me to book tickets for a family night out for my birthday to see Henry Rollins doing his amazing two-and-a-half-hours-without-drawing-breath feat of holding an audience spellbound. The man has matured like a fine tattooed wine into a rich, well rounded and full bodied (still super-fit) vintage. 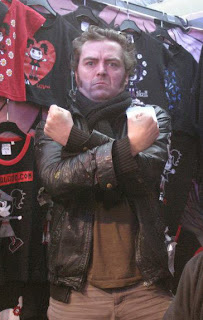 Angouleme talks also included a very entertaining Eddie Campbell/Paul Gravett interface, which ended bizarrely with the trailer for an as yet not-made TV sitcom starring Eddie as himself, and I did manage to get a seat at the Menu and Pakito Bolino RAW talk, but had to excuse myself half-way through due to a mystery virus that swept through our group. Chance sightings included Menu (again), Lewis Trondheim, Joe Sacco and Charles Burns, Art Spiegelman and Francoise Mouly, one of the joys of the festival being the almost rubbing shoulders with so many of one's heroes.
The sense of camaraderie with all our fellow brits, from Paul and Peter, to Dan Berry, Ellen and Steven, Gary and Lauren, Tony Bennett, the Orbitals Camilla, Simon, and Tom and many more, extends to those from further afield, catching up with old faces (hey Abbie and Xavier!) and meeting new ones like our excellent table neighbours, Tom Scioli and Chris Fitzer from Adhouse Books, and even to Jessy and the gang on the other side (pics above by Oliver Lambden, see more here). 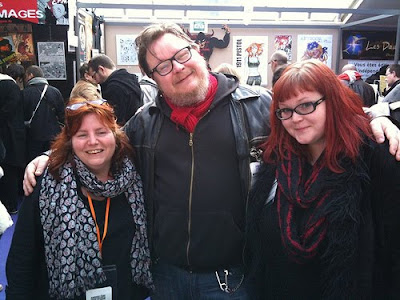 This is me with the wonderful Kivi Larmola and Sanna Karvonen whom I met in Angouleme last week ( pic by Sean Azzopardi, check out his report).
Posted by fabtoons at 02:11 No comments:

So much to catch up on as there have been no postings since well before Christmas.
Well, there was Duckie, a fairly pleasant couple of days of moderate sales in the foyer of the Barbican. The festive season was rounded up with a few days down in Kent for Nick and myself — we spent a couple of nights at the Linen Shed, a fabulous B&B in Boughton under Blean, just outside Faversham, being spoilt rotten gourmet by Vicky Hassan with her gourmet breakfasts and tempura mattresses. New Year's Eve was Nico and the gang at the Anchor for music and good times. 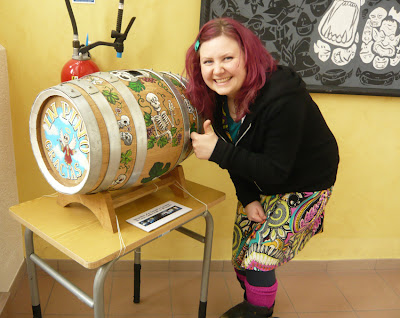 End of January saw Sean, Sally Anne, myself and Oliver heading back to France for our yearly pilgrimage to Angouleme. This time Art Spiegelman, with Françoise Mouly, curated a smorgasbord of talks, exhibitions and events, which managed a perfect balance between French and American comic history. There was a magically dreamlike Fred display at the Hotel St Simon, and Spiegelman's own retrospective showed the man's achievement in the right (gloomy) light; the tinyness of the Maus original artwork a revelation. 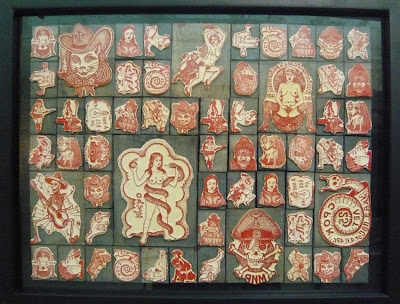 Other favourites were the Sardon rubberstamp exhibit, the party at the Maison des Auteurs and the work on show there, while the big disappointments were Chris Ware's no-show, and not managing to get in to the Charles Burns or the Fred talks. 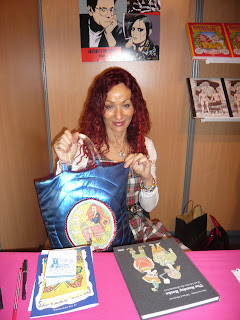 However Sally Anne
and I did get to meet
Aline Kominsky
and her very cool bag!
Posted by fabtoons at 06:21 1 comment: