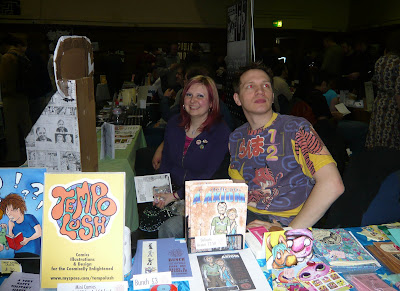 Saturday 28th March dawned and Richy K. and I set off for the wilds of Mile End, fortuitously hooking up with Sally Ann on the tube. We set up our wares on our very well-positioned table, next to Rob Jackson, and awaited the rush of punters. It was busier than last year, possibly due to it not being Easter weekend, with a fair amount of the traffic stopping at our table. At the end of the day, I sold all my copies of Striptacular and came away with a profit after table costs, which is a good result.
I picked up the latest Curtis and Terrorist from Oliver Lambden, Jake Harold's That Time I Went on a Trip to Berlin, Rob Jackson's Bog Wizards 2 (with board game!), Paul Rainey's No Time Like the Present part 8, Phil Spence's Reasons Why I'm Scared to Love You and Whores of Mensa 4.
All really good stuff – I will endeavour to review things more fully at some point. 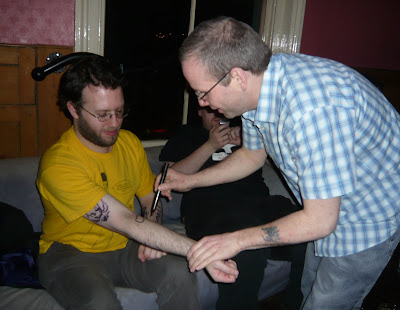 We then moved on to Schmurgencon which was taking place in uncompromising fashion just down the road.
It was altogether a more intimate affair, involving a certain amount of liquid refreshment and experimental performance art. The mysterious Norwegian was nowhere to be seen, he was rumoured to have suffered some kind of accident... 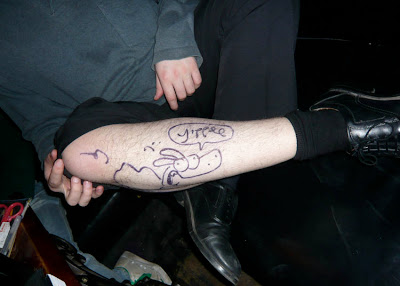 Posted by fabtoons at 03:16 No comments: 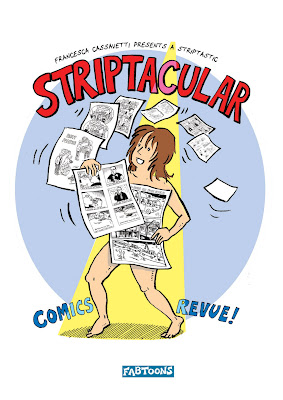 I can breathe a sigh of relief having managed to get my new 36 page comic ready in time for the Thing on saturday. PHEW!
It contains nine brand spanking new strips (well one is my last observer competition entry ... but unpublished nonetheless as I didn't win) and a couple of pages are in colour. I will be hawking it at the UK Web and Minicomix Thing 2009 in Mile End this Saturday so come and get yourself a copy.
I will be sharing my table with my mate Richy K Chandler and the lovely Sally Ann Hickman.
Posted by fabtoons at 02:25 3 comments:

It's been a while since my last post.
Been to Paris again, been busy busy drawing, making comics as well as regular Monday pubdraws. I am putting together a new book for the Thing; it will contain nine different stories and I think it will be called STRIPTACULAR!
Last Sunday went to Alex Fitch's Electric Sheep launch doodah in Brick Lane, sold a couple of comics, and saw a fantastically mad Japanese movie, The Evil Brain from Outer Space.
Sean has done a brilliant thing and set up a website for a bunch of us to upload artwork in a collective stylee. It is called THE SEQUENTIAL. I have posted something just now.

Oh and I made my own font thanks to Jake and Oliver who gave me this link!!
Posted by fabtoons at 13:34 1 comment: 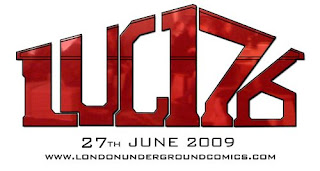 Oh look London Underground Comics are announcing their next event on the 27th of June 2009 at the fantastic 176 art gallery in Chalk Farm. Yippee!
More details HERE.
Oh and I forgot to mention that I appear in the last ever issue of Comic Foundry magazine, page 11 if you're interested. So now some people in AMERICA know my name... well one or two anyway.
Posted by fabtoons at 11:57 No comments: