Of sheep and monsters 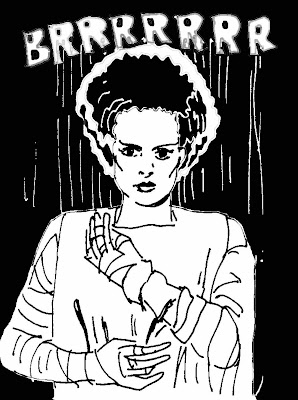 Two soirees unfortunately clashed on Thursday evening. However, with some skillful time management, we managed to attend both. First up we hot-footed down to Waterloo for Sarah McIntyre's Vern and Lettuce launch at the Stamford Arms. The place was packed with sheep-knitting yarnstormers, there was champagne and cake, and great company from the comics and illustration fraternity. Clutching our signed copy, we rushed back to the London Print Studio to catch the last gasp of the launch of That's Novel, an exhibition of graphic novels on the Harrow Road featuring our good friend and fellow bastard Paul Rainey with some brand new images.
Meanwhile, back at the drawing board, with the realisation that everything I have produced of late is destined to appear in other people's collections, I am attempting to create something new in time for Comiket which will soon be upon us.
Posted by fabtoons at 00:16 No comments: 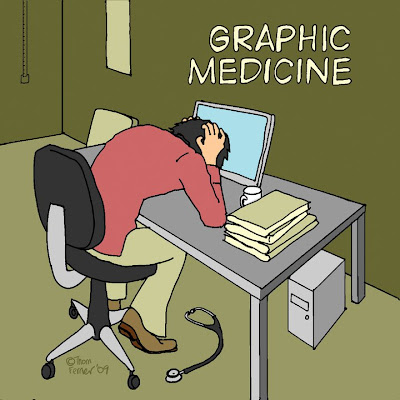 The lovely Ian Williams has done me the honour of including TMNTITW and Sole Searching on his Graphic Medicine website dedicated to promoting comics associated with all aspects of medicine. Along with highlighting such classics as Harvey Pekar's Our Cancer Year, David B's Epileptic and Charles Burns' Black Hole, it features the work of Thom Ferrier whose strips give us an insight into the doctor-patient relationship from a GP's perspective. Disrepute is a beautifully handbound collection of probably autobiographical stories while Fear of Failure is also a cracking story that you can follow online.
I have been having plenty of NHS dealings recently, mostly positive, what with getting my mother back into the system after a more than forty-year absence from this country. Nick had a fall resulting in another trip to A&E and yet another fetching scar on my darling hubby, only accentuating his Oliver Reedness – I'm not complaining. My own mishap involved a tiny invisible bump on my face that I decided should get checked out. I was sent to the melanoma clinic, just in case, where the attending doctor told me it was benign and proceeded to blast it with liquid nitrogen. I attended my nephew's beautiful bucolic wedding sporting an enormous crusty burn on on my chin, giving me the appearance of someone in the tertiary stages of syphillis. After four weeks it is finally clearing up...
Posted by fabtoons at 08:47 No comments: 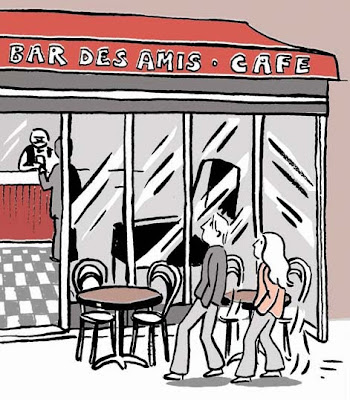 Well all the copies of Bastards 2 have been distributed to the various contributors. Last Friday, Paul Rainey was up in town to check out the London Print Studio Gallery where he will be exhibiting in a couple of weeks as part of this year's Comica festival. We took the opportunity to get together with as many of the gang as could be mustered in Portobello Road, to hand out copies and drink beer.
In between the usual domestic duties, and some not so usual, somehow contributions to Solipsistic Pop 3, Paper Science 3, Gin Palace 2 and the Observer Competition got finished and delivered. 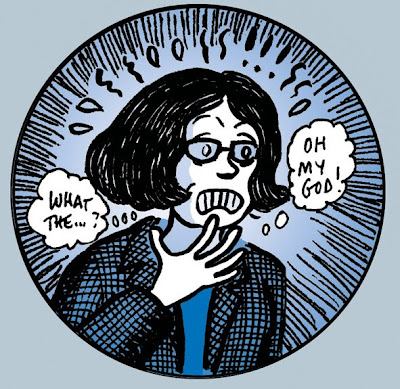 A lot of these publications will be launched at Leeds Thought Bubble next month where I will be exhibiting. For anyone impatient to get their hands on the new B.A.S.T.A.R.D.S 2 I will also be appearing at Comiket Independent Comics Fair in London on November 7th, although other contributors will be at Birmingham next week and at MCM Expo at the end of October.
Posted by fabtoons at 01:14 1 comment: